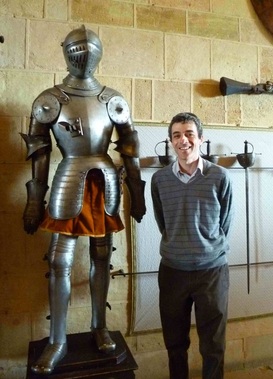 Matthew en el alcázar de Segovia
Professor Matthew Warshawsky is an Associate Professor of Spanish in the Department of International Languages and Cultures at the University of Portland. He holds M.A. and Ph.D. degrees in Spanish Literature and Culture from The Ohio State University, and a B.A. in Latin from Swarthmore College.

Professor Warshawsky's teaching and research interests are in Jewish history, literature, and culture in the Iberian Peninsula and Latin America; Sephardic studies; and Spanish literature and culture of the Renaissance and Baroque eras.

For the past seven years, Professor Warshawsky has researched and written historical and cultural studies of New Christians prosecuted by the Inquisition tribunals of colonial Mexico and Peru during the 1600s for the heresy of secretly practicing Judaism. In this context, the term "New Christian" describes Spanish and Portuguese Catholics whose Jewish ancestors were forcibly baptized. He has completed studies of four such individuals and their families in Mexico and one in Peru, and plans to use this material in the preparation of a book-length manuscript. Presently he is also co-editing a book that will be published by Hispanic Monographs consisting of essays written by scholars who participated in a conference on Don Quixote held at the University of Portland in March 2012.

Professor Warshawsky uses primary and published Inquisition documents (letters, testimony, trial records) as well as literary responses to the Inquisition in order to increase our awareness of the religious and cultural practices of crypto-Jews and their descendants in Iberian and Latin American history and literature. He is particularly interested in studying how secret Jews maintained their beliefs in a setting of marginalization and coercion, and how their descendants today construct their own identity. By explaining how the Iberian Inquisition functioned, his research also aims to lessen present-day stereotypes about this court.
Powered by